Big Bear Mountain Bike Enduro 1 2020 the good the bad and the ugly.

The first Big Bear Enduro Race August 1, 2020, after some delays and uncertainties due to the ongoing COVID 19 pandemic it was finally on the calendar.
I was excited and relieved that I trained and did not pack on any pandemic pounds as many have.  It was to be three stages including Pirates, plumbers, and fall-line, trails I was familiar with and comfortable on as these are not the faster slope runs on the front of the mountain.

Eager to practice I went up to Snow Summit on Saturday a week before the race weekend.
Once I arrived the slope runs on the front of the mountain were calling my name, bought a day pass and off I went.
Miracle Mile to warm up, oops I messed that line up lets try that again, let’s add some turtle runs to get up to speed.
Oh, I did not remember that section, let’s do that again, and again. Party wave sounds good and besides I need to work on my jumping, that was fun let’s do that again.
I should really ride the stages to get familiar, I thought for a second but talked myself out of it, the slope runs are so much fun and besides, I know the stages.

4hrs later I had put in 10 runs and I was feeling it, it felt like I was doing push-ups, calf lifts and squats all day, and my hands were screaming at me “enough already you got to drive home too.

Smiling and satisfied with my “Grinduro” day it was time to leave and head home. I felt good about my practice I got used to the faster runs and my confidence was good.

Next, up let’s get new tires on the bike for race day, off came the Maxxis Assegai and Dissector on went the Onza Aquilla.
Quick shred at Greer Ranch the local hot spot to test the tires, nice ride happy with the grip and rolling resistance, all is well.
Now some shorter higher intensity rides and lots of foam rolling to get ready for the race.

The day before the race

Everything was smooth sailing, I felt good about this one.
I took off the Friday of the race weekend and drove up to Big Bear with my wife, my grandson, and our dog, we had a reservation at a motel Friday and Saturday night.
The plan was to ride the stages Friday and be all dialed in for Saturday’s race.
Well, that plan changed when I thought I should not be selfish and spend time with the family, so instead of riding the stages we went to boulder bay walked around hiked a little, raced some gocart, and had fun.

We crashed at the motel that night with live music next door which was loud and went on till midnight, not the best night of sleep I had but not a big deal.

I got a late start due to traffic and the time it took to check out of the motel. But still had time to preride stage 1 to get comfortable.
Pre riding stage 1 I was caught off guard by the lack of grip, the combination of dry powdered dirt and pine needles was slicker than snot. Oops, maybe I should have spent more time on this stuff, too late now I thought.
Questioning my tire choice was the next thought, maybe I would have been better off with the Assegai?
Either way too late now.
Pushing those thoughts aside I tried to clear my head and get ready to focus on racing.

Time to line up, I lined up behind Matthew and told him “I’m going to chase you down”. Matthew is currently in 3rd place overall and I’m sitting in fourth place. I almost convinced myself when I said it, but the reality was the loose corners made me uneasy.
5 4 3 2 1 go, no wait, failed start due to equipment error, then the familiar buzzer went off 30 sec later, I took off…. “wait not yet” she said, “sorry about that” “Thanks for the extra practice” I said and thought to myself so much for chasing Matt down.
OK, we are ready 5 4 3 2 1 go. I took off felt good around the 1st corners now up the hill.
My breathing became erratic, oh no I thought I’m running out of air, those thoughts did not help my breathing became out of control.
I was slowing down, once I hit the descent my body was sour, filled with lactic acid, and burning throughout.
My mind started to race more than I was, what’s going on? I was supposed to go full steam ahead, the breathing work I did and my training, what happened, I can do better than this, I should be doing better than this.
Wow, those thoughts really did not help, I got so uptight I ran off the trail on a straight section, further derailing my thoughts.
At the last turn of Stage 1 right before the finish, my rear tire stepped out and instead of a 90 deg turn, I made a 180.
That did not help my confidence one bit.
see the video here Youtube Video Big Bear Enduro Stage 1

Ok get your shit together Rob I thought, you can do better than this.
54321 go…. now I can redeem myself and restore my confidence, wait did I just run off the trail again, Fu$& I thought, I’m off today, now I started coughing from the dust I sucked in, oh boy, this is not my day.
Let’s take it easy and ride clean I thought, well that led to me going overly cautious through turns and losing all my momentum.
Ok just finish the stage and don’t crash I thought, everybody, has to deal with the same conditions, not just me.
That actually helped calm my racing mind.
I started to ride better, still sucking wind but better.
see the video here Youtube Video Big Bear Enduro Stage 2

Now I’m thinking my goal is just to ride its a nice day, its a blessing to be here, I’m grateful I can do this.
54321 go I’m feeling better my breathing is calmer, I’m feeling stronger.
This may be my best stage yet, is it still slippery, Yes it is, loose a.f. actually.
Yes, I knew the trails, but not as well as I thought and not in these conditions, pine needles, and powder dirt equals needle bearings regardless of the tire choice.
I was still riding very cautiously but felt better physically. I could not afford another “running out of trail scenario.
Instead, I almost stalled in turns but that was OK, just don’t crash and deal with a scattered brain again.
Coming off the descent on a flat fire road I washed out with a lot of tire noise almost like I was locking up my rear brake, but I wasn’t on the brakes, I was trying to gain speed it was like I hit a patch of marbles.
Just get up and finish, I thought shaking my head after this mystery crash.
Crossed the finish line, glad it was done.
Immediately disappointment set in and I started to analyze everything and probably started to overanalyze things, which wasn’t helpful at all.
see the video here Youtube Video Big Bear Enduro Stage 3

I pre-rode the slopes which were more fun, but clear of pine needles and watered frequently, things were different on the back of the hill, as I learned on race day.
I should have warmed up more so I would not get sour so quickly and surprisingly.
Controlling my thoughts better and not let them get away from me as they did would have been helpful.
Dwelling on mistakes did not serve me well.
Having doubts about my tire choice was due to a lack of time on them.
Racing thoughts are not your friend.
Motels are not restful. 😒
Relying partially on local food purchases brought me out of my comfort zone physically and mentally.
Most of what went wrong were the thoughts in my head though.

Tips for your race day.

Preride when you can, even when you think you know the stage, conditions change.
Try to preride close to race day and try to ride at the same time of day, to see the lighting, shadows, and moisture, or lack thereof.
Spend time riding the bike as you will race it to build confidence in your setup.
Pack your own foods, foods that you have proved out and you are used to.
Servers don’t know details of what is in the food as much as you know the ingredients of your own food.
Research lodging prior to booking to get familiar with the location, potential distractions, and amenities.
Forgive yourself immediately when mistakes happen, I typically think, there goes a mistake oh well now that we got that out of the way lets get back to business.
Think positive, tell yourself “great job” when you rail that corner and get excited about it.
Be in the moment don’t get caught up in your thoughts.
Control your breathing.
Focus on the task at hand.
Be grateful you have an awesome bike under you, an awesome trail in front of you, awesome people around you, you are fit and healthy, and have a supportive family and friends. (Stay healthy please, don’t crash and get hurt, you are not getting paid.)
A bad race is still a good day on your bike with friends on cool trails.
Most importantly have fun, it’s a good day on a bike!
Thanks to Team Big Bear for a great event!
Let me know your thoughts or share your experience.

We are blessed,
Rob 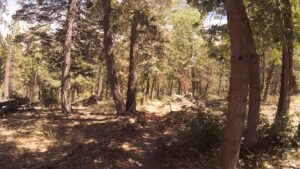